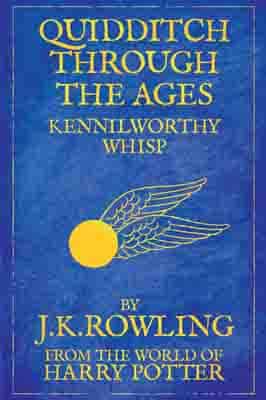 Quidditch Through the Ages by J.K. Rowling

Quidditch Through the Ages by J.K. Rowling

â€˜Quidditch through the Agesâ€™, from The World of Harry Potter is a very famous write-up from the library of Hogwarts School of Witchcraft and Wizardry. It goes deep down into the history, advancement and regulations of the game Quidditch. The librarian of the school is of the view that the book is â€œpawed about, dribbled on and generally maltreated nearly every dayâ€. Though as per the headmaster of the school, Albus Dumbledore, this state of the book is sort of honour for it. The book is safeguarded by the Thiefâ€™s Curse. Harry Potter got this book from one of his greatest friends, Hermione Granger, for his first ever Quidditch match. Nonetheless, Severus Snape took away the copy asserting that bringing library books outside was against school policies.

Some of the interesting facts that are covered by this book are: there are 700 ways in which a foul can be committed in Quidditch. This game first progressed on Queerditch Marsh. Bumping is defined in detail. Puddlemere United which was established in 1163 is the oldest team at the Britain and Ireland League.

Your Ratings on Quidditch Through the Ages by J.K. Rowling...